The Zorki-3M was introduced in 1954 as an improved version of a Zorki-3. This is an early example of the Soviet version of the screwmount Leica with the elements of the Leica M series.

Zorki-3’s design of 1951 was a real breakthrough in the soviet Leica . It was slightly larger than Zorki, but it had many new features that Zorki/FED lacked – a bright, large, combined RF/VF, a removable back, a dioptric adjustment of the viewfinder, a set of slow speeds and a high quality fast lens – Jupiter-8. The body and the back were cast and rigid. The camera also has a nice flip-up foot, like in Contax cameras. The 39 mm Leica thread mount was preserved, so Zorki-3, as any Zorki rangefinder, is fully compatible with the LTM lenses. The slow speed mechanism was obviously “borrowed” from Leitz (Leica IIIf), the actual delay mechanism was located at the bottom of the camera and coupled with the shutter controls with a long rod. The shutter had two dials – on the top of the camera for the fast speeds, and second – on the front for the slow speeds. The Soviet version of this design did not work well, needed a service more often comparing to the usual Zorki. And Zorki-3 acquired a reputation of an unreliable camera.

By 1954 a new delay mechanism was introduced – it was located under the top
plate and all speeds were set by the same dial. Zorki-3 became Zorki-3M.

This Zorki-3M was made in 1955, it is in exc- condition.
The covering and chrome surfaces are clean. The viewfinder and rangefinder are
clear and sharp. The shutter is working well at on all speeds.

The camera comes with a take-up spool.

The Zorki-3M is a great user and a nice and uncommon collectible camera. Together
with a Zorki-3, only 87,569 copies were made. I do not know if this model was
ever exported, but I doubt it. 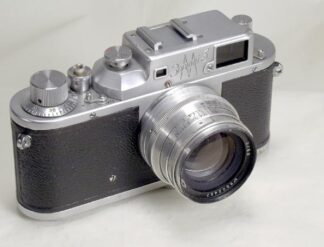