The
Zorki-4K is the last Zorki
model. The Krasnogorsk factory produced this model from 1972 to 1978. It is
identical to the Zorki-4, but one important feature was added – the traditional
winding knob was replaced with the crank lever.

This camera has the following features – a removable back cover, a rangefinder
coupled with a large and bright viewfinder, a dioptric adjustment of the viewfinder,
and self-timer. It also features a PC flash socket; the flash sync timing can
be set for both electronic flash and a flash bulb. The body and the back cover
were cast, which made the camera rigid and stable.

As any Soviet Leica type camera, Zorki-4K is compatible with any 39 mm Leica TM lens. 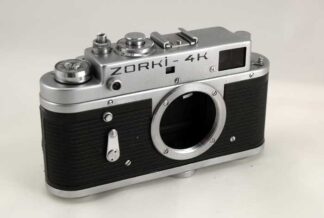