The Zorki
was the second Leica II(D) copy produced by the mighty Soviet photo industry.
Krasnogorsk plant joined FED in the “Leica” business in the late 40’s.
The very first Zorkis made by KMZ had FED engraving next to Zorki (named
FED-Zorki, quite rare now). From the early 50’s Krasnogorsk was
on its own, and many successful LTM rangefinders were made until the glorious
line of Zorkis was ended in the mid 70’s.

This Zorki comes complete with
a take-up spool, and a
lenscap.

The Zorki is a capable user and
a nice and desirable collectible Leica copy. You can try any TM Leica
lens with the Zorki body, and use its sharp Industar-22 with any screwmount
Leica. 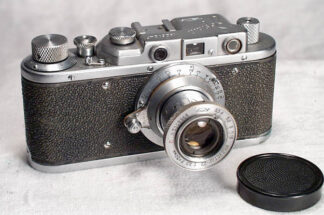