This lens replaced its predecessor Industar-26m as a
standard lens on the FED-3 and early FED-4 cameras. The optical design of the
Industar-26m was improved and aperture stop-clicks were introduced.

This is one of the newer multicoated LTM lens made by
the Soviet (now Ukrainian) photo industry. It is sharp and contarsty, with smooth
focusing action and the aperture click-stops. The lens later evolved in all-black
Industar-61LD.

The lens was also made in universal 42mm mount for Zenit cameras, named Industar-61L/Z.
It was my favorite 50 mm lens for years, and I
still keep it, even though I am not using my 42 mm mount SLRs anymore.

This Industar-61 was made in the late 70’s. The lens
is in exc.- condition, the glass is clean.

If you have a screwmount Leica (or Leica copy) and want
to have a sharp coated lens on it – try this Industar-61, you will not be disappointed!

It is shown mounted on a Leica IIIa (not included). 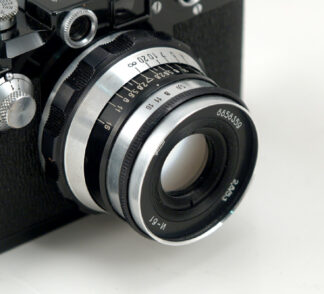