The FED-4
was the fourth major FED modification.
The camera was based on the FED-3b design and has all its features – a removable
back cover, a dioptric adjustment of the VF, and a self-timer. All FED-4 cameras
are equipped with the lever advance mechanism.

The FED-4 introduced a new feature – it was the first FED LTM rangefinder equipped
with a built-in uncoupled light meter. The light meter dials forced the rewind
wheel to the side of the camera – this design solution is unique to the FED-4
model only. The next model, FED-5, had the rewind knob in its usual place – on the
top cover.

The body and the back cover are cast, the camera is rigid and stable.

This FED-4 was made in the early 1970’s. FED is not using usual Soviet convention
in the serial numbers (when the first two digits designate the production year),
so it is hard to specify the age of this camera exactly.

Please note:
for normal shutter operation, FED recommends changing shutter speeds after
the film is wound and the shutter cocked. Lens not included

Why AS IS: One of the curtains has pinholes. The light meter does not respond to light. Note that there may be other problems with the camera, as it is not fully checked.

About AS IS items. These cameras and lenses are in need of at least some repairs to make them usable for picture taking. They are non-returnable and non-refundable. This could be a great shelf item or a repair project.

Be the first to review “FED-4 Type b Body, AS IS” Cancel reply 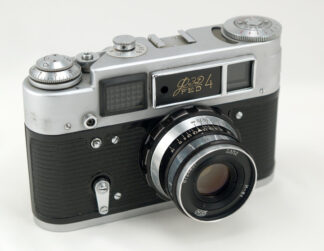