The FED-2 was a successful attempt by the Soviet camera makers to improve upon the original Leica design, which was copied in the FED 1 for two decades. The camera has the following features – a removable back cover, a new, wide base rangefinder coupled with a viewfinder, a diopter adjustment of the VF and strap lugs. As any Soviet Leica copy, this FED-2 is compatible with the 39 mm Leica TM lenses. FED-2 is probably the most successful FED camera – it is more convenient to use than the original FED (Leica II (D) copy) and is more compact than the newer FEDs (FED-3 to FED-5).

The body and the back cover were cast, which made the camera more rigid than the original FED. The shutter and the film transport mechanism were also redesigned
and worked very smoothly. There were many modifications made to the FED-2 during its production from the mid 1950’s to 1970.

This FED-2 is a late production model, version “d” (by Princelle).
It was made by FED factory in Kharkov in the late 50’s – early 60’s. The camera has all the features of the FED-2 – a self-timer, a flash sync, a new winding button with a  memo dial, and a newer, faster and sharper lens – Industar-61.
This FED-2 was apparently designated for export, it has both Russian and English engravings on the front of the top plate. Export camera were subjected to much
stricter and tighter quality control at the FED factory.

This FED-2 comes complete with a take-up spool and a plastic lenscap.

This FED-2 is a great sample of this Soviet classic, a capable user and a nice collectible camera. You can mount any Leica lens on the FED-2, and use its sharp Industar-61  with any screwmount Leica.

Be the first to review “FED-2 type d” Cancel reply 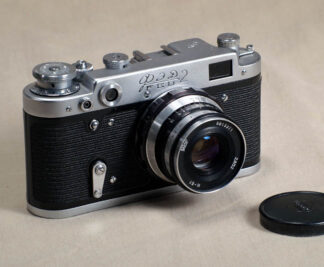