Smena-2
(CMEHA, “next (young) generation” in Russian) was one of the most affordable Soviet cameras in the 60’s. There
were many models made by two factories (GOMZ/LOMO in Leningrad and BELOMO in
Minsk), but it all started with the original Smena and Smean-2 made by GOMZ
in Leningrad in the early 50’s. This was a  “starter” camera that was given to children. Those successful in guess focusing (I was not one of themL ) got great results with this light simple camera equipped with a sharp lens.

Smena-2 was made of Bakelite, it had a removable back door. There was no rewind
mechanism on this model, and it could only be used with 2 cassettes. The shutter
release lever is on the shutter body, the button on the top of the camera is
a part of a double exposure prevention mechanism. You have to press it to advance
the film.

The camera is in a good condition, nice and clean. Made in 1956. This camera was intended for the domestic market, so it is not common outside the former USSR.

Be the first to review “Smena-2, Uncommon” Cancel reply 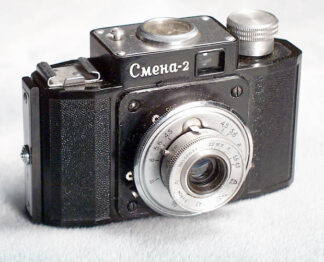