The Russian MTO-1000
is a truly magnificent sample
of Soviet-era engineering and workmanship. It is an extreme telephoto mirror
lens based on the design of a known Soviet engineer Maksutov. “MTO”
stands for “Maksutov’s Tele Ob’ektiv”. This is original, early MTO-1000,
the largest and heaviest lens made in the USSR. Later versions of this lens
were much lighter and somewhat smaller, they came is vinyl cases, but this MTO-1000
weighs 3.9 kg (8.6 lbs!) and comes in an instrument-type wooden case.

This MTO-100 was made in 1960. It is in EXC- condition, the barrel shows
little use, just a few paint scuffs. The glass is clear and clean.
The focusing is smooth.

You will need a sturdy tripod to shoot with this lens.

The lens is shown mounted on a Zenit (not included). In this case this is the
camera that is mounted, not the lens! This MTO-1000 can be used with any 39
mm mount Zenit (models Zenit, Zenit-S, Zenit-3, Kristall, Zenit-3M, early Zenit-E).
With a 39/42 mm adapter (not included) the lens can be used with M42 cameras. 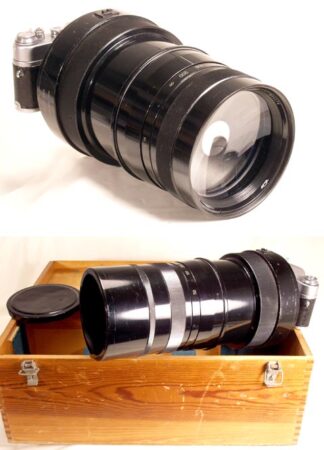