The Kiev-4am was the last production Contax II type camera made by Arsenal plant in Kiev (Ukraine).
Together with the Kiev-4m, it was in production till 1987, when Zavod Arsenal finally ended the glorious line of Contax copies.

Contax design was so solid, it was hard to improve. So the engineers of Arsenal plant could only introduce
some cosmetic changes to the Kiev-4. They made it look more modern – the shutter and rewind knobs became black, and a crank was added to the rewind button. The camera was also equipped with a new, faster lens – Helios-103, 53/1.8. The lens is a great performer and has a very nice and smooth aperture dial with click-stops. Another improvement was a hot shoe; the PC socket was still on its usual place. The camera had a new, built-it take-up spool and a redesigned transport disconnect. In order to rewind film, you have to turn one of the bottom plate lock levers.

This Kiev-4m was made in 1981.
The camera is in exc. condition, it shows very little use. The RF is clear and sharp, the lens is clean and clear, practically mint. The  shutter is working on all speeds, the self-timer is operational as well..

The camera comes with a lenscap.

As well as any Soviet Contax copy, the Kiev-4m is a rugged and precision camera, equipped with a great lens.
It is capable of taking advantage of modern films, and is simply a great fun to use. 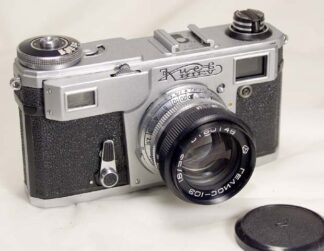