The Russian Helios-40-2 is one of the greatest lenses made in the USSR. This lens was initially produced as the Helios-40 in 39 mm SLR mount, and was intended for use with the early Zenit cameras (Zenit, Zenit-S, Zenit-3, Zenit-3M, Kristall). Since around 1970
the lens was modernized – it received a new mount (standard M42), new finish (black enamel), and new name – Helios-40-2.

The lens is large, heavy, it has a lot of glass and metal. The aperture is
a “preset” type – there are two rings. You set the aperture with one ring (it
has stop-clicks), and after the focusing is completed, you close the aperture
to the preset value with the second ring without taking your eye from the viewfinder.
The lens has a built-in 3/8″ tripod mount.

The lens has very “shallow” depth-of-field, and this feature is ideal for
portrait pictures. You can easily control backgound sharpness with the aperture
settings.

This Helios-40-2 lens was made by the KMZ plant in 1975. It is in EXC+ condition, with clean glass and smooth mechanics.

The lens comes with both (front and rear) caps.

The lens is shown on a Zenit-12xp (camera not included). 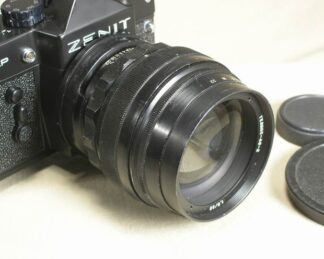